Click here For the complete history and development of the Piranha to U.N.C.L.E. Car .

Used to gain access U.N.C.L.E. HQ, they were activated on an individual basis by a chemical on the receptionists fingers.

Used by a group of insurgents intending to take over a small South American country these rifles came equipped with actual military infra-red night scopes.

Worn by Illya Kuryakin throughout all four seasons. It's identified by "David" written on the back side of the holster.

Though there were dozens of special props built for the series, this page features the surviving props that have been preserved in private collections. After most TV series were finished in the 60's the props were generally lost or purposely thrown away by the studios simply to make more room. Fortunately, because of a handful of dedicated fans many of these iconic props still exist today. For an extensive look at the general props used on the series please visit: https://www.facebook.com/pages/The-PROPS-of-UNCLE/599040223566830

Felton and Sam Rolfe gave thought to an U.N.C.L.E. gun. "I wanted one gun capable of shooting single shots or rapid-fire automatic shots," Rolfe observed in a TV Guide interview, "with sound or silently. I also wanted sleep inducing darts, explosive bullets and just bullets, and a gun that could convert to a long-range rifle". In addition, the gun would have to be concealed from time to time, either on an agents person or broken down and hidden in an attache case. Of course, an actual gun with all these capabilities simply did not exist and it would be up to Bob Murdock, Arnold Goode and Marcel Vertoutier, the prop and special effects team along with toy designer Reuben Klamer to create the fantastic but believable U.N.C.L.E. Special.

Fan letters poured in to MGM at the rate of 10,000 per week (Heitland, 1987). And of that number, at least 500 were addressed, not to the principal actors or to the guest stars, but to the U.N.C.L.E. Special (or simply "The Gun"), the unique weapon designed to be carried by the U.N.C.L.E. characters (Cymrot, 1965; "What a Weapon," 1965). Gimmicks were an important element of U.N.C.L.E., and the series employed a number of distinctive, pseudo-futuristic props, including a pen communicator, a car with gull-wing doors and more which garnered the show an Emmy nomination for it's cutting edge style and creativity by their prop and special effects teams.

THE GADGETS FROM U.N.C.L.E. 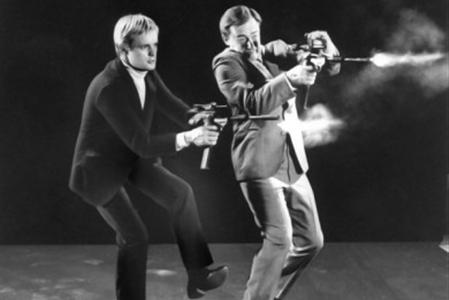 Details of the Thrush Uniforms 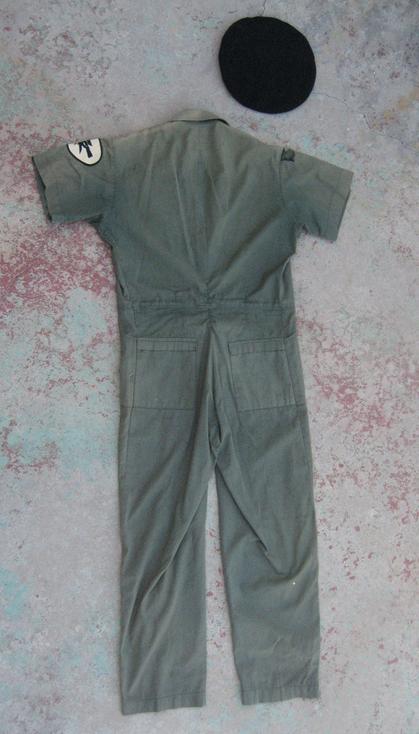 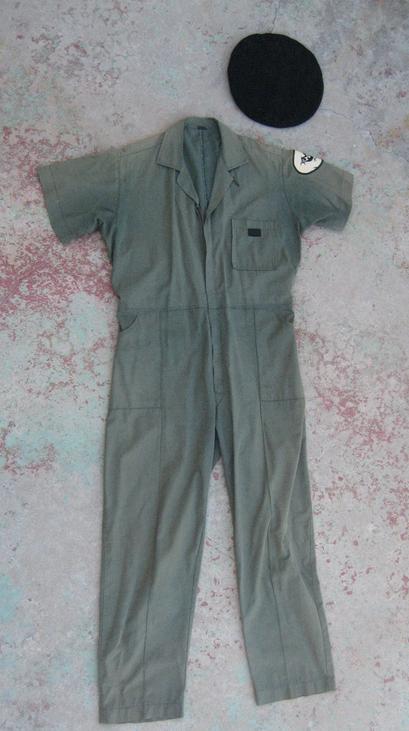 Gene Winfield's TV & MOVIE CARS, Commercials and Special Projects is now available for purchase. This hardbound publication is 8-3/4" x 11-1/4" with 254 pages and over 500 photographs. It features 8 pages about The Man from UNCLE car and 4 pages about the AMT Piranha cars. Copies are available directly from Gene Winfield for $49.00 each, plus shipping. Contact Gene at genewinfield@ymail.com. 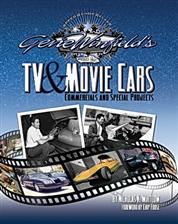 AMAZING REPLICAS OF THE U.N.C.L.E. SPECIALS AND SHOULDER HOLSTERS ARE AVAILABLE HERE:

These small targets were used exclusively on the target range inside U.N.C.L.E. headquarters.

The iconic rotating table was used throughout the series and was covered in "black leather" for the fourth season.

Solo, Illya, April, Mark and various other agents used this ultra modern gull winged vehicle during the 67'-68' seasons.  The car was equipped with front and rear lasers (in the headliner), grill mounted flame throwers (behind the grill), retractable bullet shield (which hid the weapons compartment), radar and sonar for tracking, a breaking parachute (behind the license plate), on board surveillance cameras, guided missiles (launched from tubes in the gull wing doors and engine compartment), retractable rear propellers (the car was amphibious), and smoke screen ejectors.  The U.N.C.L.E. Car was custom built for the series by Gene Winfield by modifying the Dan Deavers designed AMT Custom and Speed limited edition Piranha kit car. The only stock component of the car was it's Corvair engine, the rest was custom, from it's fiberglass frame to it's cast aluminum suspension. 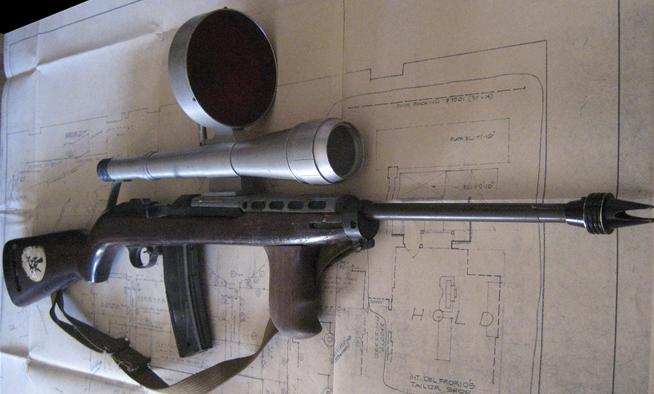 The U.N.C.L.E. Communicator was another gadget that everyone wanted in real life. The precursor to the cell phone, it came in many disguises, from cigarette cases, ring, fountain pens, cameras and cigarette lighters. With the use of Telestar they could reach across the world, be used as a sensor or tracking device and were so unique to the 60's spy era that not even James Bond had anything similar. 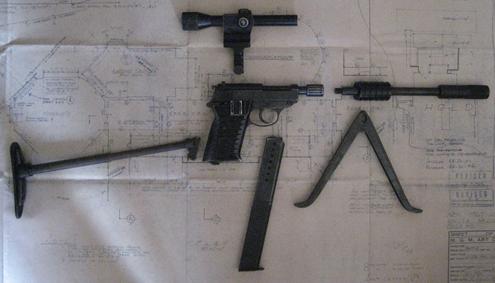 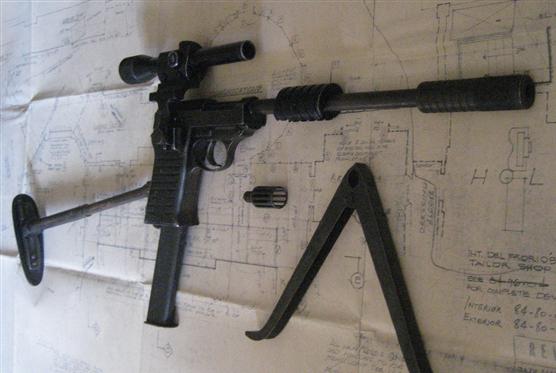 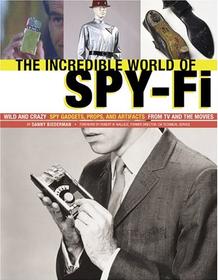 "The Incredible World of Spy-Fi" by Danny Biederman features an entire section on the history of the U.N.C.L.E. props.

This helmet was featured in the "Cherry Blossom Affair"

This diabolical Thrush device was created in order to "half kill" a man by disrupting the function of his brain.

This is one of the standard jumpsuits worn throughout the entire series.

Seen in the "Gurnius Affair" this faux leather covered slab with leather straps was used by Illya to torture Solo in order to save his life.

This sinister weapon was featured throughout the original series. The M1 carbine, created by propmaster Arnold Goode, came equipped with an infra red projector and night sight and emitted a eerie bird like chirp when activated.

Seen here in the "Alexander The Greater Affair' it was also featured in much of the promotional material.

Used in the "Prince of Darkness Affair" to cut through the villain's massive concrete roof.

Seen throughout the first three seasons, this iconic  abstract painting and lamp were feature prominently in Waverly's office.

Used by Solo during the teaser of the "Do It Yourself Dreadful Affair", it would also reappear during in the "Prince of Darkness Affair".

The show's craftspeople also created many more one-off props, costumes, set decorations and support material throughout the series. Below is an archive of the memorabilia that now resides in private collections.

Established in the "Discoteque Affair" as being able to fire bullets along with knock out gas it was used by Boris Karloff as Mother Muffin in "The Girl from U.N.C.L.E.". 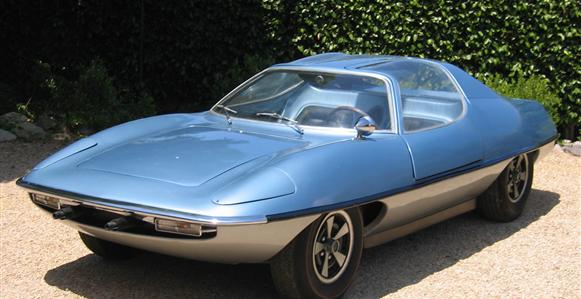 Find out more about Gene Winfield's early years in this highly collectable book which feature a small section on the U.N.C.L.E. Car.